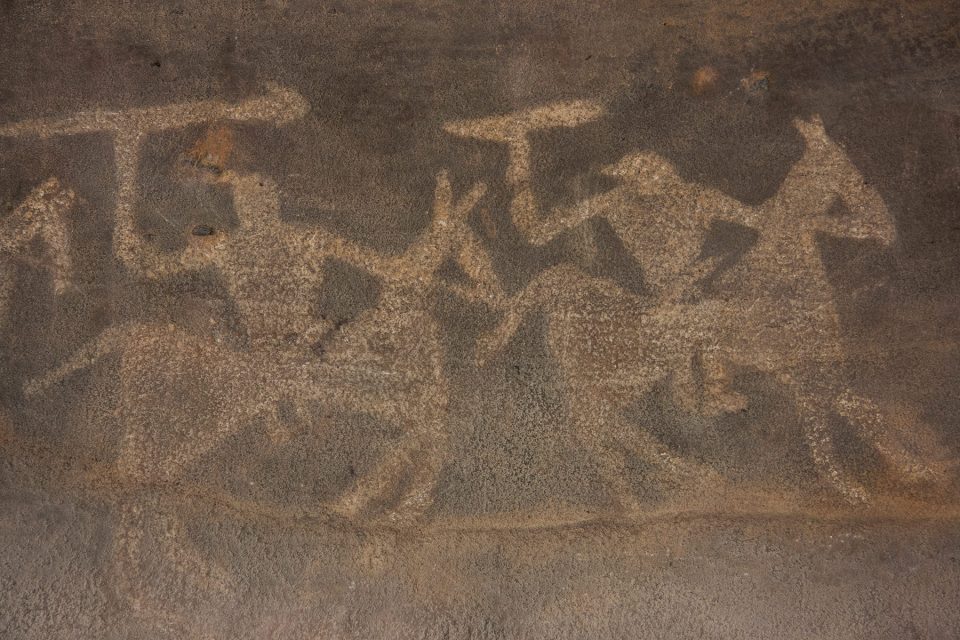 What Do Cave Paintings Tell Us? -- John Felvinci -- MCLL Lecture

Brushes made from horsehair were used for paint application and outlining. Paint spraying, accomplished by blowing paint through hollow bones, yielded a finely grained distribution of pigment, similar to an airbrush. The oxides of iron dug right out of the ground in the form of lumps were presumably rich in clay. This consistency was conducive to the formation of crayon sticks and also could be made into a liquid paste more closely resembling paint.

Shoulder and other bones of large animals, stained with color, have been discovered in the caves and presumed to have been used as mortars for pigment grinding. The pigment was made into a paste with various binders, including water, vegetable juices, urine, animal fat, bone marrow, blood, and albumen. Prehistoric painters used the pigments available in the vicinity. So we always speak of his meat as worthless. This way we cool his heart and make him gentle. In the context of a close-knit human group, self-mockery can be self-protective. In the Paleolithic age, humans were probably less concerned about the opinions of other humans than with the actions and intentions of the far more numerous megafauna around them.

Would the herd of bison stop at a certain watering hole? Would lions show up to attack them? Our ancestors occupied a lowly spot in the food chain, at least compared to the megafauna, but at the same time they were capable of understanding and depicting how lowly it was. They knew they were meat, and they also seemed to know that they knew they were meat — meat that could think. And that, if you think about it long enough, is almost funny. P aleolithic people were definitely capable of depicting more realistic humans than stick figures — human figures with faces, muscles and curves formed by pregnancy or fat.

Tiles found on the floor of the La Marche cave in France are etched with distinctive faces, some topped with caps, and have been dated to , years ago. A solemn, oddly triangular, female face carved in ivory was found in late 19th-century France and recently dated to about 24, years ago. But all these are small and were apparently meant to be carried around, like amulets, perhaps — as cave paintings obviously could not be. Cave paintings stay in their caves. What is it about caves? The attraction of caves as art studios and galleries does not stem from the fact that they were convenient for the artists. In fact, there is no evidence of continuous human habitation in the decorated caves, and certainly none in the deepest, hardest-to-access crannies reserved for the most spectacular animal paintings.

Nor do we need to posit any special human affinity for caves, since the art they contain came down to us through a simple process of natural selection: outdoor art, such as figurines and painted rocks, is exposed to the elements and unlikely to last for tens of thousands of years. Paleolithic people seem to have painted all kinds of surfaces, including leather derived from animals, as well as their own bodies and faces, with the same kinds of ochre they used on cave walls. The difference is that the paintings on cave walls were well enough protected from rain and wind and climate change to survive for tens of millennia.

If there was something special about caves, it was that they are ideal storage lockers. If the painters of Lascaux were aware of the preservative properties of caves, did they anticipate future visits to the same site, either by themselves or others? They moved to follow seasonal animal migrations and the ripening of fruits, probably even to escape from the human faeces that inevitably piled up around their campsites. These smaller migrations, reinforced by intense and oscillating climate change in the Horn of Africa, added up to the prolonged exodus from that continent to the Arabian peninsula and hence to the rest of the globe.

Multiple visits by different groups of humans, perhaps over long periods of time, could explain the strange fact that, as the intrepid French boys observed, the animals painted on cave walls seem to be moving. There is nothing supernatural at work here. Look closely, and you see that the animal figures are usually composed of superimposed lines, suggesting that new arrivals in the cave painted over the lines that were already there, more or less like children learning to write the letters of the alphabet.

So the cave was not merely a museum. It was an art school where people learned to paint from those who had come before them, and went on to apply their skills to the next suitable cave they came across. In the process, and with some help from flickering lights, they created animation. The movement of bands of people across the landscape led to the apparent movement of animals on the cave walls. As humans painted over older artwork, moved on, and painted again, over tens of thousands of years, cave art — or, in the absence of caves, rock art — became a global meme. There is something else about caves. Not only were they storage spaces for precious artwork, they were also gathering places for humans, possibly up to at a time in some of the larger chambers.

To paleoanthropologists, especially those leaning toward magico-religious explanations, such spaces inevitably suggest rituals, making the decorated cave a kind of cathedral within which humans communed with a higher power. Visual art may have been only one part of the uplifting spectacle; recently, much attention has been paid to the acoustic properties of decorated caves and how they may have generated awe-inspiring reverberant sounds. People sang, chanted or drummed, stared at the lifelike animals around them, and perhaps got high: the cave as an ideal venue for a rave.

Or maybe they took, say, psychedelic mushrooms they found growing wild, and then painted the animals, a possibility suggested by a few modern reports from San people in southern Africa, who dance themselves into a trance state before getting down to work. Each decoration of a new cave, or redecoration of an old one, required the collective effort of tens or possibly scores of people. Twentieth-century archeologists liked to imagine they were seeing the work of especially talented individuals — artists or shamans. But as Gregory Curtis points out in his book The Cave Painters, it took a crowd to decorate a cave — people to inspect the cave walls for cracks and protuberances suggestive of megafauna shapes, people to haul logs into the cave to construct the scaffolding from which the artists worked, people to mix the ochre paint, and still others to provide the workers with food and water.

Careful analysis of the handprints found in so many caves reveals that the participants included women and men, adults and children. If cave art had a function other than preserving information and enhancing ecstatic rituals, it was to teach the value of cooperation, which — to the point of self-sacrifice — was essential for both communal hunting and collective defence. In his book Sapiens, Yuval Noah Harari emphasises the importance of collective effort in the evolution of modern humans. Lacking pack animals and perhaps tired of walking, humans began to settle down in villages, and eventually walled cities; they invented agriculture and domesticated many of the wild animals whose ancestors had figured so prominently in cave art.